Suspending The Federal Gas Tax Won’t Provide Relief At The Pump, But Will Add To The Pain Of Using America’s Roads And Rails

The chief executive officer of the Associated General Contractors of America, Stephen E. Sandherr, issued the following statement today in response to President Biden’s call to suspect the federal gas tax of 18.3 cents per gallon to offset gas prices that have risen by over $3 a gallon since 2020:

“The President’s desperate proposal to suspend the federal gas tax won’t provide relief at the pump, but will add to the pain of using America’s roads and rails. That is because the irresponsible proposal, if enacted, would leave a massive hole in the federal Highway Trust Fund that pays for federal investments in road, bridge and transit improvement projects that would need to be filled with new taxes or additional deficit spending.

“Fuel prices are rising for a variety of reasons, including the war in Ukraine and the fact demand is up while the White House has been cancelling pipeline projects and federal oil leases and discouraging long-term investments in new fossil fuel extraction. Those factors have led to a more than $3 per gallon increase in the price of fuel since 2020 and will not go away even if the federal fuel tax of 18.3 cents per gallon were to be temporarily waived.

“Instead of helping motorists, this ill-conceived proposal will make the cost of shipping and commuting higher as growing congestion and worsening road conditions delay shipments, leave commuters stuck in traffic, damage vehicles and undermine economic growth. Ultimately, all taxpayers will be forced, via new taxes or additional deficit spending, to plug the massive revenue holes this desperate ploy will create. Congressional leaders have seen through this idea, Speaker Nancy Pelosi called this proposal “showbiz” and former President Obama and Senate Minority Leader Mitch McConnell called this idea a “gimmick.”

“More broadly, it is hard to understand why the President is going to such great lengths to undermine the potential benefits of his signature bipartisan achievement, the infrastructure measure he signed into law last year. His administration has already sought to hobble the measure with restrictive labor mandates, unworkable domestic sourcing guidelines and time-consuming new regulatory reviews. Now, by implying that the federal gas tax is a significant factor in the price of fuel, he is undermining support for the primary funding source for those infrastructure investments.

“We hope this proposal goes nowhere but we take nothing for granted. That is why will take every possible step to educate members of Congress about why this proposal must not pass.”

AGC of America created a messaging document and graphic for Chapters and members to distribute in their quest to educate the general public on why the gas tax is the best bang for their buck to fund infrastructure improvements; 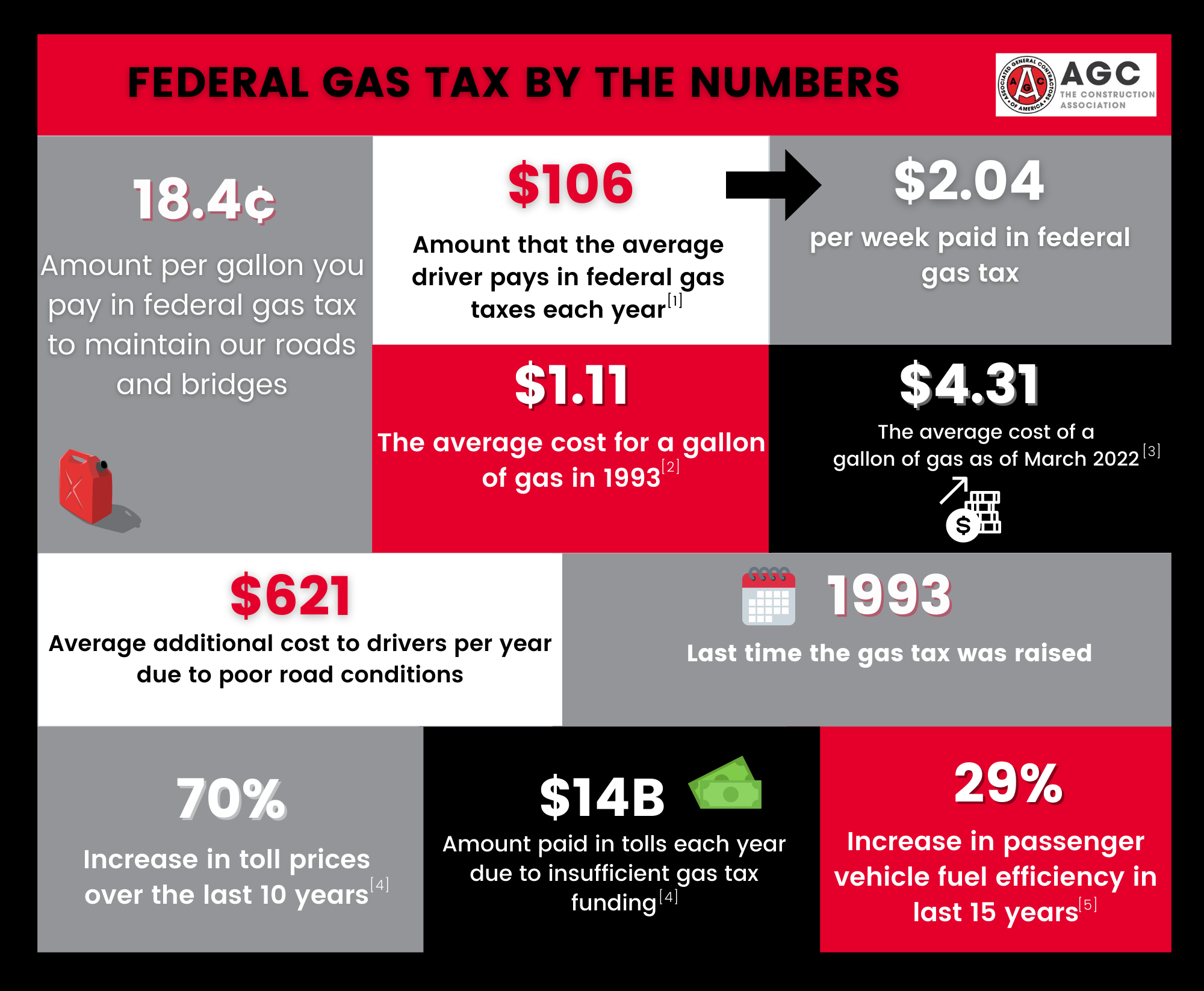